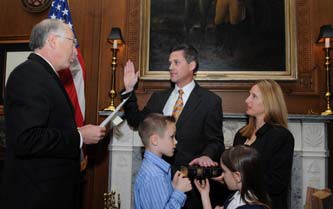 Washington, DC April 20, 2010 —Today, Daniel J. Little joins the National Indian Gaming Commission (NIGC) as associate commissioner for a three-year term. He joins Acting Chairman George Skibine and Vice Chairwoman Steffani Cochran on the three- member panel, which has not had a full quorum, except briefly, since December 2007.

Mr. Little has over a decade of Indian gaming related experience, working as government affairs manager for the Mashantucket Pequot Tribe of Connecticut. This experience has enabled Mr. Little to develop in-depth knowledge and understanding of the Indian Gaming Regulatory Act (IGRA) and the process governing tribal gaming operations, said Secretary of the Interior Ken Salazar when announcing his intention to make the appointment.

“I’m looking forward to contributing to the team at the NIGC in protecting tribal interests and assets,” said Mr. Little. “The Indian gaming industry has played a key role in revitalizing tribal economies over the past several decades, and consistent oversight is the bedrock in implementing the Commission’s statutory responsibilities and securing industry compliance with IGRA.”

Dan attended Florida Atlantic University and resides in northern Virginia with his family.