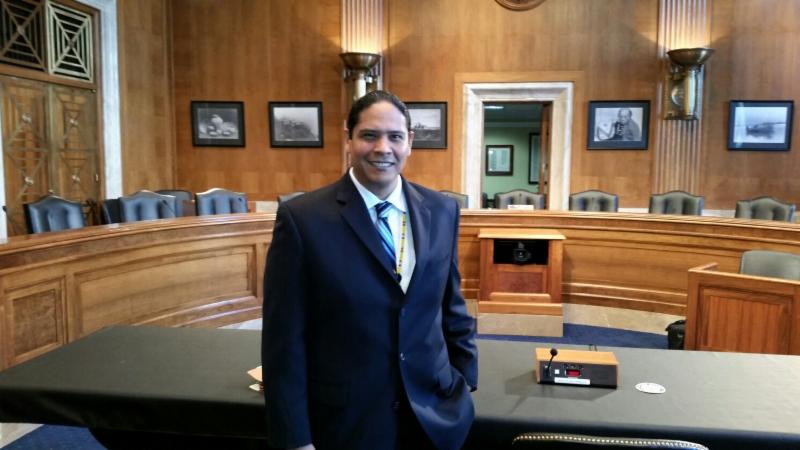 WASHINGTON, May 13, 2015 – Jonodev Osceola Chaudhuri (Muscogee Creek) was sworn in as the seventh Chairman of the National Indian Gaming Commission (NIGC) by Secretary of the Interior Sally Jewell today. As Chairman of the NIGC, Chaudhuri will lead a team responsible for regulating and ensuring the integrity of the more than 450 Indian gaming facilities, associated with nearly 242 tribes across 28 states.

“I would like to thank President Obama, the Senate, Secretary Jewell and those in Indian country who have supported my nomination,” said Chaudhuri.  “There is important work ahead of us at the NIGC. I am committed to continuing our collaborative efforts with tribes and tribal regulators to achieve regulatory compliance and gaming integrity in an industry which is a vital economic development tool for so many tribes.”

Chaudhuri has been serving as the Acting Chairman since October 2013 under a designation by President Obama. Under his leadership, the Commission continued to execute its regulatory mission, conducted more training for tribes and tribal regulators than in any previous years  and actively worked to strengthen the regulatory structure of the Indian gaming industry. Chaudhuri has also taken active steps to ensure that the NIGC stays ahead of technological developments in Indian gaming and general operations management. In early March 2015, the Commission announced its intent to develop a technology division that furthers these efforts.

Chaudhuri has already laid out key guiding principles for the Commission.  They include the need to:

Act within appropriate agency authority to address and mitigate activity that jeopardizes the integrity of Indian gaming and, by extension, the valuable self-determination tool that it represents;
Swiftly act on anything that jeopardizes the health and safety of the public at gaming establishments, including employees and patrons;
Engage in sound regulation without unnecessarily stymieing lawful economic development activities; and
Protect against anything that amounts to gamesmanship on the backs of tribes.

Prior to his appointment to the NIGC, Chaudhuri served as Senior Counselor to the Department of the Interior’s Assistant Secretary for Indian Affairs, where he provided guidance and assistance on a wide range of national policy issues, including Indian gaming, economic development, energy, Alaska affairs, and tribal recognition.

The National Indian Gaming Commission is committed to the prompt and efficient regulation of the Indian gaming industry spanning more than 450 gaming establishments, associated with nearly 242 tribes across 28 states. The Commission’s dedication to compliance with the Indian Gaming Regulatory Act ensures the integrity of the $28 billion Indian gaming industry. To learn more, visit www.nigc.gov and follow us on Facebook and Twitter.